Adams Heritage Centre is commemorating the Littleport Riots with a special window display throughout the month of May and into June.
The Riots took place in May in the village 205 years ago and resulted in the hanging of 5 men. The Riots in Littleport and Ely happened between 22 and 24 May 1816. The riots were a result of starvation in the village due to very low wages, very high grain costs, and reflected the general unrest which spread throughout England following the Napoleonic Wars. In 1815, a pound of bread cost just over 4 shillings. Average wages for the period remained static at 8–9 shillings, per week. Many farmers and millers were profiteering from the high prices of wheat, hoarding grain, making huge sums of money on the backs of the agricultural poor.
The year 1816 is known as the Year Without a Summer, also the Poverty Year and Eighteen Hundred and Froze To Death because of severe climate abnormalities that caused global temperatures to fall massively. This resulted in crop failures and major food shortages across the Northern Hemisphere. Evidence suggests that the anomaly was caused by the massive 1815 eruption of Mount Tambora in April in the Dutch East Indies, known today as Indonesia. 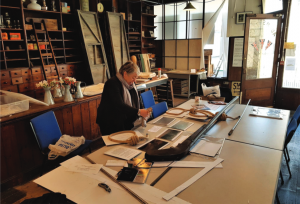 On 22 May 1816, a group of 56 locals met at The Globe Inn in Littleport (where the little Co-Op now stands) to discuss the lack of work, rising grain costs and to see what poor relief was available, virtually none. Fuelled by alcohol, the locals directed their anger at Littleport farmer Henry Martin, overseer of the poor in 1814, ungenerous and unsympathetic, he was not well liked. One man borrowed a lighterman’s horn, blowing it outside The Globe Inn, gathering hundreds of villagers to join the first group, and so the riot began. The rioters began at Mr.
Mingey’s shop, where stones were thrown through the windows, next Mr Clarke’s property where they threw his belongings into the street. Then, at Josiah Dewey’s place, the Rev. John Vachell and his wife arrived to try to calm the rioters. Vachell had been vicar of St George’s since 1795 and was also a magistrate; an unpopular man who dealt harshly with even minor offences. He read or tried to read the Riot Act without effect. The rioters continued through the village demanding food and money. At about 11 pm, the rioters arrived at the house of the Rev. John Vachell, who, after threatening to shoot anyone who entered his house, was disarmed when three men rushed him. He fled on foot with his wife and two daughters towards Ely. The rioters destroyed his goods and chattels and stole some of his silverware. Vachell was later to sue the Hundred of Ely for the damages under the Riot Act. He received over £708 ( approx £54,594 today). In the meantime the rioters had stolen a wagon and horses from Henry Tansley and equipped it with punt guns, armed with pitch-forks, they marched to Ely, arriving just north of the city between 5 am and 6 am on 23 May. (We have a replica punt gun in Adam’s window based on the one at Welney Wetland Centre) The Rev. William Metcalfe met them, read the Riot Act, and asked what the mob required. On being told that they wanted “the price of a stone of flour per day” and that “our children are starving, give us a living wage,” in a panic the Reverend agreed but stated that he would have to consult with the other magistrates. He asked everyone to return to Littleport, but they marched on. Metcalfe implored them to go to the market place and many did go there, where they were joined by Ely locals. The riot spread through Ely. Magistrates attempted to calm the protests by ordering poor relief, fixing a minimum wage and foolishly supplying them with free beer. The following day, 24 May, encouraged by Lord Liverpool’s government, a militia of the citizens of Ely, led by Sir Henry Bate Dudley and backed by the 1st The Royal Dragoons, followed by the Royston troop of volunteer yeomanry cavalry, rode into Littleport. The rioters had barricaded themselves in the George & Dragon in Station Road. In the ensuing fight, a trooper was injured, one rioter was killed, and at least one went on the run. The assizes, held in Ely and presided over by a Special Commission of two judges, Mr Justice Abbott and Mr Justice Burrough, for the 82 charged, 73 of whom were in prison and nine on bail, lasted from Monday 17 June 1816 through to the following Saturday. On Saturday 22 June 1816, six men were acquitted; 10 were discharged; 36 were bailed; 23 men and one woman were condemned of whom 18 men and the woman, Sarah Hobbs, had their sentences commuted. Of the 19 persons commuted, nine were sentenced to penal transportation. The five men condemned were all from Littleport. William Beamiss (42) the elder a shoemaker, George Crow (23)a labourer, John Dennis (32)a publican, Isaac Harley junior (33) a labourer and Thomas South the younger (22). On Friday 28 June 1816 at 9 am, the condemned men, William Beamiss, George Crow, John Dennis, Isaac Harley and Thomas South, were driven from the gaol at Ely market place in a black-draped cart, accompanied by the bishop’s gaol chaplain, John Griffin.
The men arrived at the gallows at Parnell pits around 11 am, and were hanged after praying for some time. Griffin was unofficially given the ropes, which he eventually passed on to his housekeeper, who sold cut up pieces as a cure for sore throats. Following the hanging, the bodies were placed in coffins and displayed in a cottage locally, where many people came to visit to pay their respects. They were buried the next day, upright in an old plague pit, by St Mary’s Church, Ely. As a warning to others, a stone plaque was installed on the west side of the church, it concludes, “May their awful Fate be a warning to others”. To put the riots in context it is worth remembering Rioting was commonplace in the eighteenth and early nineteenth centuries. Ordinary labourers were denied political or legal redress. In fact it was an essential part of the methods of struggle of the early working class, an acknowledged form of political behaviour that has been referred to as collective bargaining by riot.
When the rich plunder the poor of their rights, it becomes an example to the poor to plunder the rich of their property.