Carol Weyman, Chair of the Littleport and District Flower Club, welcomed everyone back to the opening up of the Club after a very long break of 18 months, and she and the Committee were delighted that so many people turned up for our return, 45 people in all. We hope that some of those who were visitors will return to enjoy the opening up and socialising again.
Vicki Hease was our Demonstrator for the night, a new Demonstrator to most of the Club, and she certainly helped to make our return a happy evening with flowers and friends.
Vicki’s Demonstration title was ‘That’s not what it’s for’ so each of her designs were done within objects that you use around the house or out shopping, which proved amusing and entertaining.
Carol explained to all members and visitors that we would not be having an Open Evening and Buffet this year as it would prove very difficult to organise and far too costly to have a National Demonstrator. She announced that the very popular Area Demonstrator, David Wright, would be doing our Christmas Demonstration in November with the title of ‘12 Days of Christmas’ and it was hoped that members would bring along a friend and other visitors could mark that in their diaries. It was hoped that at our AGM in February 2022 we would have lots of members re-join and our membership would be good and strong for many years to come.
Anyone wanting more information about the Club should contact our Secretary Sue Constable on 01353 861012 or the Chair Carol Weyman on 01353 360289.

Below is images of Vicki Hease, and their flower arangement. 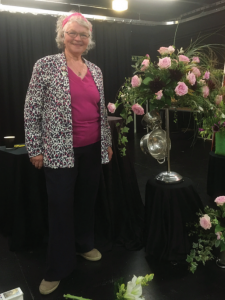 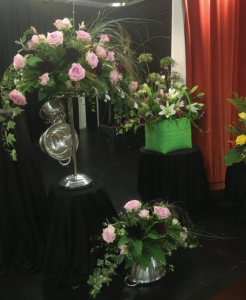