“Come on Racey – you can do it”, cried Littleport Town Cricket Club’s Chairman and last year’s Captain Chris Farnell urging his team to notch up a good score only to be beaten by 8 wickets by winners and visitors Milton one sunny but blowy Saturday afternoon down at Littleport’s Leisure Centre ground. Andy Race is Club Secretary and delighted to be playing in the Junior Division 1 League this season after the club’s promotion at the end of last season from Junior Division 2. 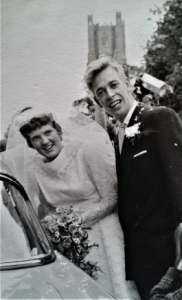 “You don’t always expect a good turnout at village cricket games these days, but that doesn’t stop us from enjoying the sport as well as the camaraderie that goes with it,” said Doug Marsh, who at 48 admits he’s not as fit as he used to be. “I used to think playing two matches a week was such a doddle”. Mind you Doug who has played cricket for a good 22 years now recalls playing with some great cricketers, and one name that springs to mind is their President Norman South who Doug was fortunate to play with and proudly comments, “And I’ve seen Norman take some wickets in his time which made it a pleasure to be part of that era.” Norman South who was given a surprise birthday party at the Leisure Centre in February mentioned that his great great grandfather Tom at the age of only 22 was one of the five rioters executed, and as Norman points out, “He was hung because of standing up for the rights of the working man as in those days aristocracy ruled the roost”. Norman’s cricketing career where he was renowned as a good fast bowler and not bad with the bat either spanned a good 30 years, playing for County Colts and for Cambridge but as he stated, “that is about as good as I got”. Littleport’s cricket matches were played at Highfield on the Ely Road, courtesy of owner John Martin, in front of decent size crowds and recalls his team providing the home game teas, as well as congregating at the Plough and Harrow pub afterwards to enjoy a pint or two to discuss the finer points of the game. Norman’s father Herbert South was also a good footballer playing left wing for Littleport and won some silverware in the 1920-1921 season. Norman himself played for Waterbeach, Ely City and Littleport Town FC, as well as making an appearance in the 1956 FA Cup final. His association with Littleport Town Cricket Club began in 1947, and he was instrumental in developing youth cricket in both Ely and Littleport. He is President of the longest standing cup competition The Kirkland Cup, Norman was also quite a dab hand at table tennis even representing the County. Sadly with the Littleport and Ely branch of the MS Society no longer in existence, Norman always raised thousands of pounds for the MS Society charity which was dear to heart as his wife of 51 years, Hilary, an ex footballer herself, died of that disease. 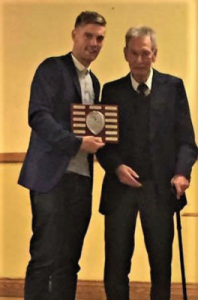 In 2008, Norman South was awarded with the ‘Unsung Hero Award’ at the Ely Standard Sports Awards for his dedication to local sports, and in 2012 he was one of the Olympic torch bearers which for Norman was such an honour. Norman South can always be seen every Saturday watching his beloved Littleport Town Cricket team from the balcony of the Leisure Centre bar, and he particularly likes to monitor his grandson’s James’ progress who scored an impressive 102 with the bat against Bottisham-Lode and is also a mean fast bowler, following up in his grandfather’s cricketing and footballing footsteps. I have often watched James South go into many a crunching tackle, as he takes no prisoners, playing football for Littleport Town FC who finished a commendable 3rd in Division 1B of the Newmarket Motor Company of the Cambridgeshire FA County league this season. Littleport Town Cricket Club are on the lookout for players and sponsorship – after all it costs them £6,000 a year to run the team which includes maintaining their diesel run mower for the cricket pitch which has to be cut at least three times a week. “Unfortunately we don’t have a Colts system anymore, but we hope to get one when the new schools open,” said Chris, who was delighted to tell Littleport Life that the current side is made up of youngsters who have come through the ranks of the Colts. The club celebrating its 126th year, have three sides who play mid week, Saturday, and in the Norfolk League on Sunday. “It’s one of the friendliest clubs around. We have a good harmony and this is the highest standard we’ve been at for ages. We do a lot of charity events. The last race night we raised £400 but we know we need different ideas because the money is always coming out of our pockets” said Chris who is also one of the Trustees of the Leisure Centre. 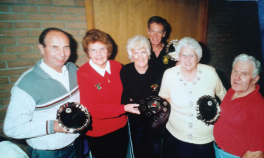